Which metals are in smartphones?¶

Metals in smartphones, for what purpose 1?¶

In 1950, we counted a dozen metals in our good old landline phones. In the 1990s, mobile phones, far from fitting in our pockets, contained a little over thirty metals. Today's smartphone, much smaller and thinner, contains more than 50 metals: a condition to have all the features of our equipment!

Indium and tin are needed to manufacture our screens to transform the touch of our index finger into a "click". Indeed, these so-called capacitive screens are coated with a film that conducts electricity while being transparent and it is an indium-tin oxide that allows this technological feat.

As for LEDs, they contain a compound of gallium (extracted from aluminum ore) and at least one other atom, which will determine the "basic" color of the LED. Thus, arsenic combined with phosphorus will give an orange-red light, while with nitrogen or indium, the LED appears blue. But the designers of LEDs have imagined being able to make more beautiful and varied colors, yellow, white, red, blue or green. Then are used different cocktails of rare earths with mysterious names: yttrium garnet and aluminum, cerium, yttrium, europium or terbium. We can also find lanthanum and gadolinium.

Improperly called rare earths, lanthanides are actually as abundant as other metals like nickel or copper and therefore more abundant than gold and silver but much more dispersed: they are called cerium, europium, gadolinium, lanthanum, neodymium, praseodymium, promethium, samarium and scandium, dysprosium, terbium, holmium, lutetium, terbium, thulium, ytterbium and yttrium.

These metals are found in trace amounts in most natural environments. Their electronic, magnetic, optical or catalytic properties make them particularly sought after by industry (aeronautics, automobile, technologies for people with disabilities, etc.).

The methods of extraction and separation of these metals require complex and highly polluting processes: discharge of acids, bases, solvents, heavy metals or radioactive waste2. In addition, these processes require large quantities of water.

For example, magnet manufacturing accounted for the largest and most important end use of REEs in 2019, accounting for 38% of the forecast demand. Magnets are used in smartphones, televisions, computers, automobiles, wind turbines, jet aircraft and many other products3.

Rare earths are also found in magnets that are needed to produce the vibrations in our smartphones: neodymium, praseodymium, terbium and dysprosium. As for tungsten, which is twice as heavy as steel, it is used as a weight to amplify the vibrations.

Most of the metal weight in smartphones is not made up of rare earths. Lithium and cobalt, for example, are found in lithium-ion batteries and a host of metals of varying degrees of rarity and preciousness in integrated circuits and printed circuit boards. Some details:

To put things in perspective in relation to the total weight of a smartphone, you should know that, depending on the model:

Of this amount of metals:

What represents in practice for a classic smartphone: 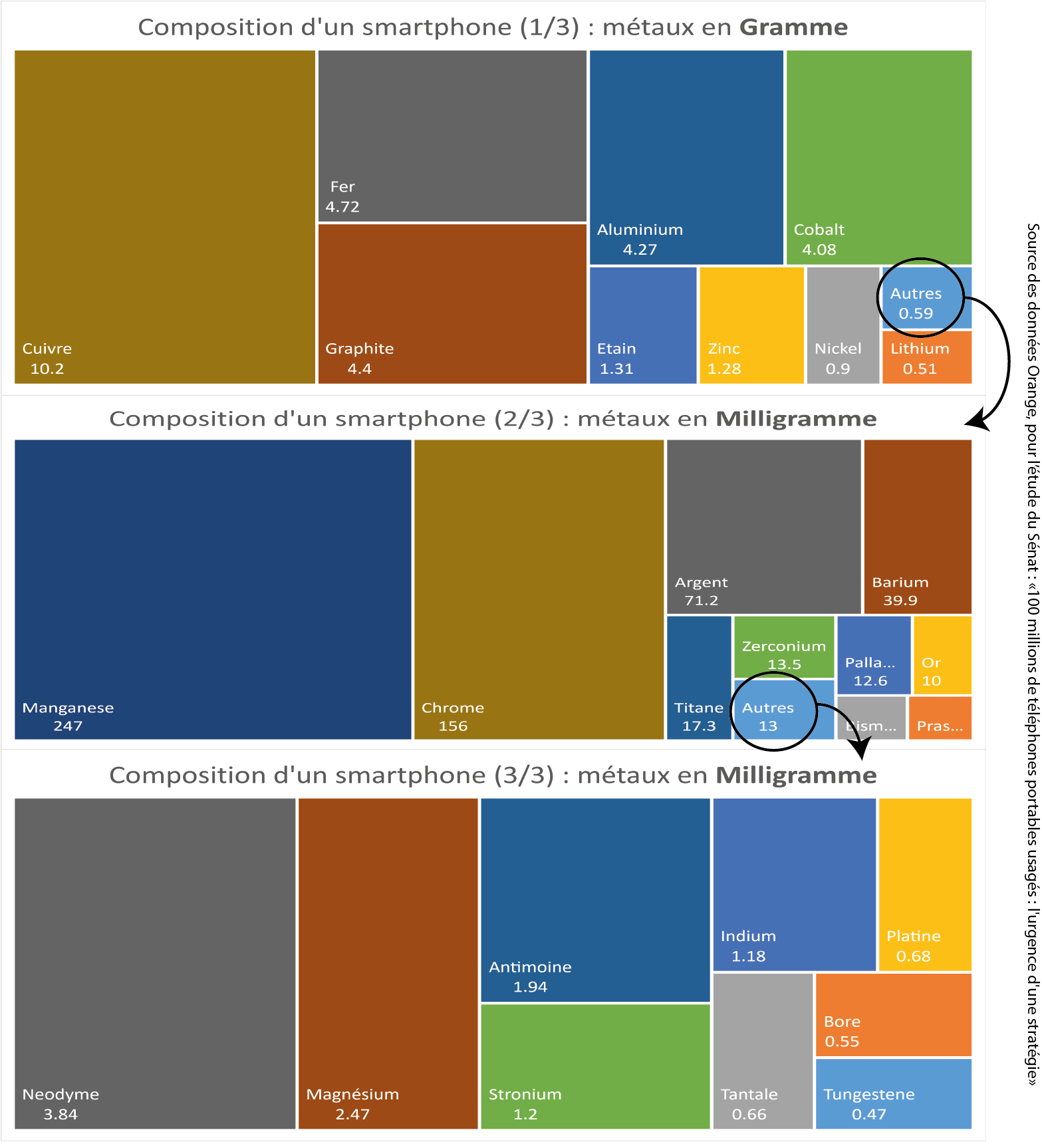 Composition of a classic smartphone, source Orange data for a Senate study5

Globally and relative to the total volume of metals produced for all sectors, the needs for digital technologies do not represent a large proportion, except for certain metals whose volume produced is low compared to the major strategic metals such as Tantalum, Indium, Germanium, and certain rare earths, but which are highly strategic.