The user is indeed, above all, a consumer, source of profit. Even when the application is free because he then becomes... the product ("When it's free, you're the product!").

It is thus necessary to keep the user on the application for as long as possible, in order to collect his navigation data for advertising purposes. Because the longer the user stays on the application, the more browsing data will be collected. This will enhance the value of the site for advertisers, and therefore enrich its owners. Thanks to the analysis of this data in real time (algorithms), it is easy to show each person what they like: this will reinforce their desire to prolong the current visit and to spend money (suggestions for purchases, linked sites, etc.).

Attracting our attention, and keeping it captive as long and as often as possible is therefore a basic principle for developers. Making us "addicted" is even a declared objective of the designers of applications such as Facebook, a pioneer model of the genre (Cf Interview Sean Parker, The Guardian, 2017).

However, as developed in the previous chapters, the apparent dematerialization of digital tools is an illusion. Their use has a colossal ecological impact, but also deleterious effects on human health (which we will not be able to develop, in particular via the sedentary lifestyle that this use promotes ANSES Report 2016 and 2020, INCA 3 2017).

We will first outline some notions on how attentional processes work, then detail the main cognitive biases used by apps to capture our attention. We will then discuss the effects of the use of screens on attentional capacities. Finally, we will discuss the issue of addiction to video games before concluding on the consequences of all these mechanisms, not only on health, but also on the environment.

Our attention is the first step towards our relationship with the world and with others. It is fundamental to every learning process and is involved in every action we take.

It is a matter of permanently filtering the flow of information that reaches us through all our senses with precision and relevance. This is essential in order to concentrate on an action, by discarding stimuli that are not relevant to the realization of the action, distractors, but not neglecting signals of potential danger, alerts. For this, reflex responses are counterbalanced by inhibition processes (attenuation), some of which can be mobilized voluntarily. Only what "pre-attentional" mechanisms have allowed to pass through, considering them relevant, thus reach consciousness.

However, the wealth of stimuli mediated by digital tools exceeds the filtering or attenuation capacities (pop-ups, notifications, etc.): it is not possible, for example, among the dozens of notifications indicating the arrival of e-mails or sms, to know before having read them, which ones are important.

Moreover, light stimuli, movements, sounds, attract and capture our attention in a quasi-automatic way (fast movements are particularly irresistible for the small child). It is thus difficult, if not impossible, not to divert the gaze towards a pop-up, which will be read automatically.

Novelty is a very efficient sensor of attention, and applications, social networks, movies, video games, are designed as a succession of new stimuli. This is particularly true for the activation of the reward system (see below). 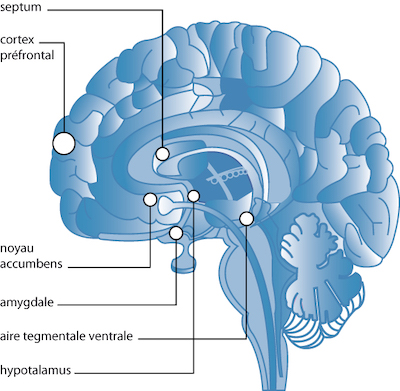 Our attention is guided by our search for satisfaction, pleasure, reward. It will naturally be directed towards stimuli likely to activate the reward system. Thanks to the executive functions, we exercise control over our attention, in particular to favour an action leading to the achievement of an abstract but essential objective that is satisfying in the long term (e.g. passing an exam requiring difficult and regular work over several months), over an action bringing immediate and concrete satisfaction (going out with a friend, watching a film). The main brain structures involved are the frontal regions, in particular the orbitofrontal cortex (OFC), the amygdala-hippocampus complex (A-H) and the nucleus accumbens.

The maturation of executive functions in humans is a long process, which continues until about the age of 25.

Repeated pleasant stimuli tend to favor short-term reward choices over long-term rewards. This is probably a key mechanism in the development of compulsive behavior and addictions.

Here are some of the cognitive biases that different applications rely on to keep the user online (Adam Adler, Irresistible, 2017; Montag et al, 2019).

All this contributes to maintain our attention captive, by relying on our reward system.

In the long term, a significant amount of screen time (the threshold remains to be defined) could weaken voluntary or directed attention capacities.

An association between screen use and attention deficit disorder with or without hyperactivity (ADHD) or poorer performance on attentional tasks has been established. The direction of the association remains debatable, but there is strong evidence in favor of a deleterious effect of screens (Christakis et al, 2004). This does not exclude the possibility that the link is a two-way one, i.e. that subjects with ADHD tend to expose themselves more to screens, finding in them a source of well-being linked to the intense cerebral stimulation that they provide (it is recalled that ADHD results from a lack of inhibition, rather than from an excess of stimulation, and that the stimulation of the inhibitory system, for example by amphetamines, thus improves the symptoms)

In the short term, the deleterious effects of the simple presence of the mobile, of endogenous (user-initiated) and exogenous (notifications, ringing) interruptions have been demonstrated: errors are more numerous, the time needed to complete a task is longer. The long-term effects remain to be clarified (Wilmer et al, 2017).

An impulse control study (Hadar et al 2017) showed that mobile use decreases abilities to defer a reward for a higher payoff. Other correlation studies are congruent, suggesting that this effect is mediated by a decrease in impulse control rather than an increase in novel sensation/reward seeking behavior.

There are most probably individual susceptibilities and "fragilities" on which certain cognitive skills may depend, in particular self-regulation abilities which would explain why certain individuals are more likely to abuse digital media, especially smartphones at the present time.

Only the " addiction to internet video games" is referenced in the Diagnostic and Statistical Manual of Mental Disorders V, published in 2015. Estimating its prevalence remains difficult, but it is probably low, about 1% of video game users. 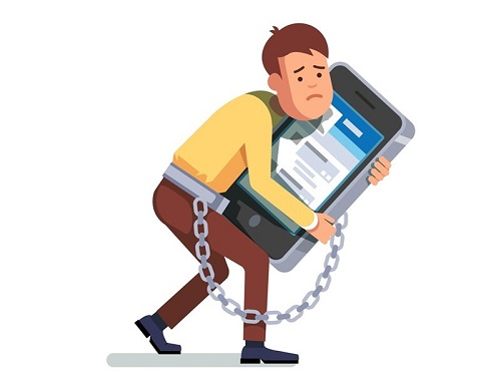 However, in clinical practice and research, much work focuses on "problematic smartphone use ". Researchers and practitioners are calling for the concept of nomophobia (No Mobile Phobia, Bragazzi et al, 2014), which would be defined by regular and time-consuming use, anxiety when the cell phone is not available, repeated checking of messages or even the perception of a "phantom" alert, a cell phone that is always available, a preference for online social interactions (rather than face-to-face), financial problems resulting from cell phone use.

Numerous studies are also looking at the issue of addiction to online social networks and, more generally, at the problems of addiction linked to NICTs.

We have not been able to address all the health problems related to these digital tools. Some include increase in sedentary lifestyle, especially among teenagers, which is a cardiovascular risk factor; alterations in sleep, and multiple harmful effects (cardiovascular, psychological, accidents, etc.), interference in parent-child relationships, especially for children under three; exposure of children and teenagers to inappropriate content (violence, sexuality, drugs) are just consequences in relation to environmental pollution; etc.

The diffusion of these technologies is at the heart of major public health issues in the medium and long term. It also deeply modifies the functioning of our society, by its impact on interpersonal relations in particular. It seems necessary and urgent to us to reflect on the place we give them and will give them.

Finally, let's remember that the mechanisms of attention capture used by suppliers have no other function than to keep us as long as possible in front of screens, on applications that consume our time, but also energy and resources (via the equipment used) while the serious environmental crisis should incite us to adopt a more moderate behaviour, that is to say exactly the opposite.