What is the acceleration effect?¶

One of the characteristics of the industrial revolution over the last two centuries is a considerable and continuous increase in the use of natural resources and production of pollution. Recently the term "Great Acceleration1" has been introduced to designate the spectacular scale reached by this phenomenon since the second half of the 20th century [1], both in terms of resource extraction (metals and fossil energies, but also biomass, water resources, etc.) and associated environmental impacts (deforestation, soil degradation, loss of biodiversity, various diffuse and toxic pollutions, etc.), as shown in Figure 1. These withdrawals and impacts are linked to the increase in the world population and its per capita needs, and their translation into all spheres of production of goods and economic services (see figure 2). 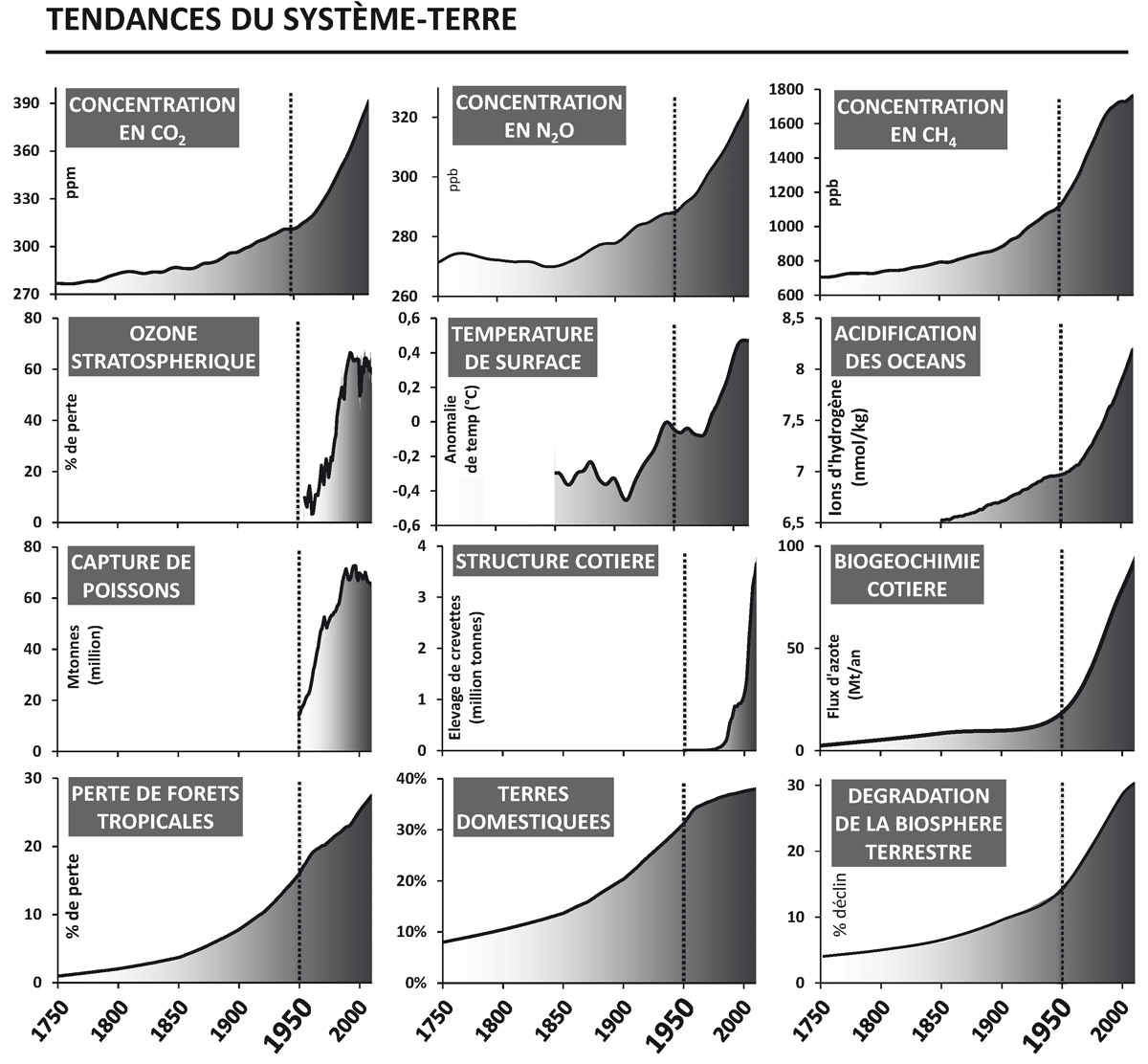 Fig. 1 -- Evolution of different indicators of the Earth system over the long period of the industrial revolution (1750-present). The original data and figures come from the article by Steffen and colleagues [1]. The French adaptation is due to Servigne and Stevens [2]. 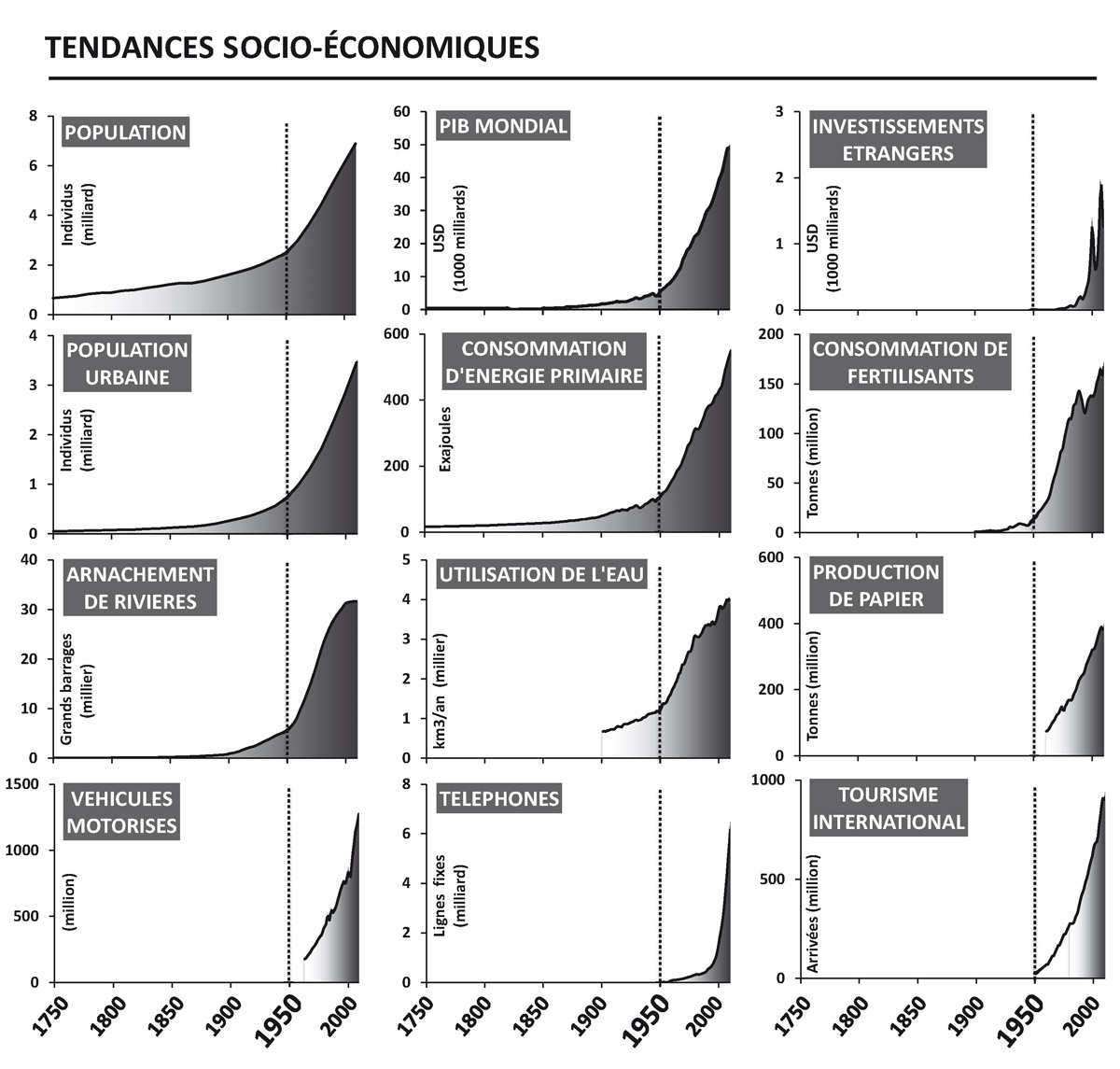 Fig. 2 -- Socio-economic trends underlying the evolutions represented in Figure 1, over the long period of the industrial revolution (1750-present). The original data and figure are from the article by Steffen and colleagues [1]. The French adaptation is due to Servigne and Stevens [2].

In this context of generalized degradation of ecosystems and natural resources, we frequently hear about a possible synergy between the ecological and digital transitions, especially in public discourse, as for example in the recent "Digital Roadmap and Environment" of the French government. This note aims to critically examine the blind spots of this idea.

The notion of synergy between the digital and ecological transitions is problematic at the very level of its formulation. Indeed, the juxtaposition of these two "transitions" suggests that digital technologies are still emerging, since the ecological transition is not yet underway. In doing so, this juxtaposition aims to put a digital future and an environmental future on the same level, the desired environmental future being the preservation of the climate, biodiversity and more generally all the components of our environment, and the digital future being based on the generalization of virtualization, in particular via 5G data exchanges, the expected power of which presupposes a revolution in uses.

This comparison is in itself strange: in one case (the environment), the desired future is a reversal of the trend, in the other (digital), on the contrary, an acceleration, which presupposes at least an absence of causal links between these two dynamics (acceleration of digital technology deployment and environmental destruction). An examination of recent historical trends opens a first critical breach in this presupposition. In fact, digital technology is made up of a set of technologies that have accompanied us in mature form for several decades, and the 5G technology is just another step in this process. Digital computing has been emerging at least in the research sector since the 1970s (and earlier in the military domain); personal computers and then laptops since the mid to late 1980s (the first MacIntosh dates back to 1984); the Internet has been commercial since 1995 and has penetrated all spheres of private and economic activity at a speed probably unmatched in the past; cell phones have been around since the 1980s and the invention of Lithium-Ion batteries in the early 1990s coupled with the rise of wireless telecommunication networks has enabled the democratization and explosion of the current wave of smartphones since the turn of the century.

In short, the only historically visible trend is a parallel evolution of the Great Acceleration and the development of digital and wireless technologies. More precisely, the last two decades at least are characterized by a strong correlation between the share of information and communication technologies in GDP2 and GDP itself, with no noticeable shift in the carbon intensity of GDP, or in its material intensity3 [3]. If digital technology had the virtues it is supposed to have, we should already have seen the effects on these two indicators [4].

This argument highlights both a correlation between digital technology and the economy in the recent past, but also a causality that runs counter to the desired effect: indeed, these elements indicate, albeit indirectly, that digital technology contributes to the acceleration of the economy and its impacts. These remarks therefore directly question the logic underlying the invokeded synergy for the future, even leaving aside the notion of transition.

To go further in this analysis, we need to question more directly and more precisely the causal links of which we have just given some indirect indications. This questioning concerns two points: the direct environmental impacts of digital technology, and the role of digital technologies in other sectors of the economy, particularly their systemic role4. The direct impacts of digital technologies, as well as the rebound effects associated with them, are increasingly documented in the literature [5,6 for example] and the reader is referred to this, as well as to the concept sheet on the subject (see concept sheet "The rebound effect"concept sheet "The rebound effect" ). But this is only the tip of the iceberg. The issue of systemic effects is much larger, but also more difficult to quantify and less well known, both in the research community and in the general population. Nevertheless, even a cursory examination of the issue shows that digital technologies act as a facilitator of the Great Acceleration, in line with the indirect evidence given above.

Indeed, this acceleration is a symptom of consumerism, one of the main characteristics of which is the permanent acceleration of the production, circulation and disposal of goods (sometimes via their programmed obsolescence). It is clear that digital technologies are, in their industrial and commercial applications, at the service of this acceleration, be it through the automation of manufacturing processes, the optimization of just-in-time logistics, or targeted advertising and sales, to name but a few well-known examples that are impossible to achieve without dedicated digital tools and applications [6,7]. In such a world, the "Big Data" operators and related services play a considerable role. Countless applications exist in all spheres of the industry, in the production of goods and services, including banking and finance, with the sole objective of permanently accelerating production, consumption, turnover and profits. Digital technologies encompass not only objects and software, but also a diffuse role in the whole economy and society (and the definition of its perimeter, including in terms of its weight in GDP, is not simple) [7]. When an environmental (or social) concern comes into play, it is either under the constraint of the legislator (who generates a whole counter-stragy of avoidance, relocations being only the best known aspect), or because it allows production costs to be reduced (for example by reducing the energy bill). In fact, digital technologies omnipresent in the economic sphere, but their role is largely invisible, with dedicated applications known only to practitioners in each of the highly specialized and fragmented segments of the modern financial and market economy.

In fact, in order to reverse this major trend, it would be necessary to reconsider the underlying motivations, i.e. the consumerist and accumulative basis of developed economies. This is extremely difficult to do: it has been part of the social and institutional foundations of nation-states for two centuries now, at least in the West. It is precisely because of this difficulty that the notion of decoupling (between economic growth, use of resources and environmental impacts) is also increasingly mobilized in public discourse, with digital technologies being perceived in this perspective as a means to achieve this decoupling. However, this is also a concept with a very limited operational scope (the reader is referred to concept sheet "Decoupling - a solution to the climate crisis?"concept sheet "Decoupling - a solution to the climate crisis?" for more details on this concept and its limits).