The estimation of the direct environmental impacts of digital technology (energy, water, greenhouse gases, resources) raises in parallel the question of the possible positive impacts of digitalization for the ecological transition. What is the state of our knowledge on this issue, what are the assertions, methodologies and hypotheses that are currently being used? This concept sheet looks at all these questions in an attempt to clarify them and to underestimate the possibility of a "net balance" between direct negative environmental impacts and indirect positive impacts.

In our framework, positive impacts are linked to the term "Enablement", which could be translated as abatement effect or avoidance effect. This refers to the potential mechanisms of substitution, optimization and behavioral changes enabled by digitalization. This avoidance effect is generally expressed on a single environmental factor, greenhouse gas emissions. Some reports in the grey literature (not published by publishing houses) mention avoidance of gasoline or water consumption, but the final result is usually given in eq-CO2. This means that the positive impacts of digitization are currently understood via a mono-criteria approach and therefore rather limited.

To the author's knowledge, there are no scientific publications on the global estimation of the positive impacts of digitalization for the transition. On the other hand, there are several publications that focus on a specific use or a particular case (tele-medicine, road navigation, teleworking, etc.). In 2018, in a systematic review of the literature, Bieser and Hilty identified 54 studies from research articles, conference proceedings, and grey literature1. 31 of these studies focus on a single type of use with Life Cycle Assessment (LCA) or carbon footprint methods, 21 are studies with multiple use cases and use an approach called "ICTem" (ICT enablement method). More than half of these 21 studies are based on reports from companies in the sector, do not constitute scientific literature and should therefore be approached with great caution.

The grey literature is the only one that provides global estimates of positive impacts. In this case, two professional organizations have produced reports in this sense: the SMART and SMARTer reports of GeSI (Global e-Sustainability Initiative) and the report "The Enablement Effect" of GSMA. Companies such as AT&T have also produced reports, but only for their industry. The GeSI reports estimate that digitization could reduce global greenhouse gas emissions by up to 20% by 20302. The GSMA report, which is more focused on telecommunications, estimates that 1 ton of CO2e avoids 10 tons in other sectors3.

Another part of the scientific literature focuses on the methods for estimating the positive impacts of digitization. Without proposing a perfect method, most of the research articles point to the methodological shortcomings of global estimates and try to formulate new modelling methods. In particular, Jens Malmodin and Vlad Coroama have repeatedly criticized the extrapolation of case studies to arrive at a global estimate4 and have proposed, together with Pernilla Bergmark, Mattias Höjer and Craig Donovan, a way to model the effects induced by digitization5. However, it can be estimated that today there is no stabilized method to model and estimate the positive impacts of digitalization for the ecological transition.

Beyond the methodological considerations for producing appropriate modelling, it seems important to understand how the two global estimates put forward today are produced. GeSI's most recent report, "SMARTer 2030", uses an "ICTem" approach which consists of drawing data from a case study to define an avoidance lever, weights the effects of the studied technology lever by defining an adoption rate. Multiplying the avoidance lever by the adoption rate yields a result of avoided emissions. The approach used in the GSMA report, "The Enablement Effect", uses a mixed approach based on case studies where the leverage is multiplied by the number of smartphones and the number of Machine-To-Machine (M2M) connections, but also based on the results of an online questionnaire on the usages of 6,100 smartphone users in 9 different countries. 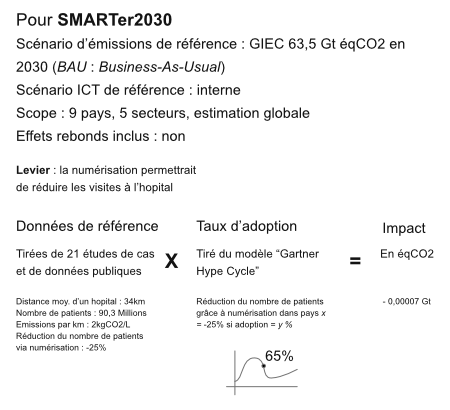 Summary table of the methodologies of the GeSI and GSMA reports

The results of these reports are expressed in almost the same sectors of activity: energy, industry, agriculture, residential and tertiary buildings, mobility, commerce, work, health... But the results given by the two reports are very different. This difference can be explained by the difference in scope. GeSI's mission is to look at the digital sector as a whole, whereas the GSMA report focuses on mobile technologies. However, we will see below that GSMA's scope is more vague than announced. 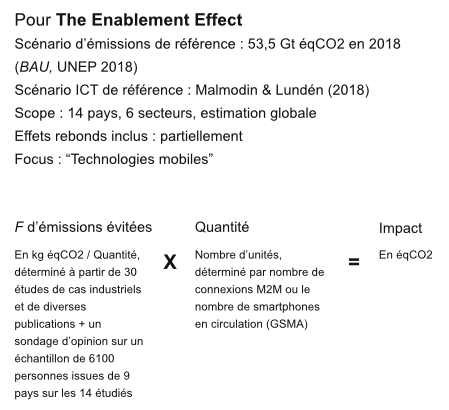 This statement seems ambitious at first glance, so how is this ratio defined? In fact, the method used to obtain this impressive ratio is ambiguous. GSMA compares the potential avoided emissions enabled by digital and mobile technologies to the environmental footprint of mobile operators (i.e. 20% of the sector's environmental footprint according to Malmodin and Lundén 2018). This allocation is justified as follows: "It is common to simply state that the technology avoids all emissions, and not attempt an arbitrary allocation. The test being that if the technology (in this case mobile technologies) plays a fundamental role in achieving the result, then it can be said to avoid emissions."6 However, in the digital sector, each link in the chain has a fundamental role (servers, networks, devices), so it seems impossible to determine what is more fundamental. Thus, the data center sector and device manufacturers can claim the same amount of avoided emissions. In the end, if, and only if, the avoided emissions estimates are correct, then at best the ratio would be 1:2. 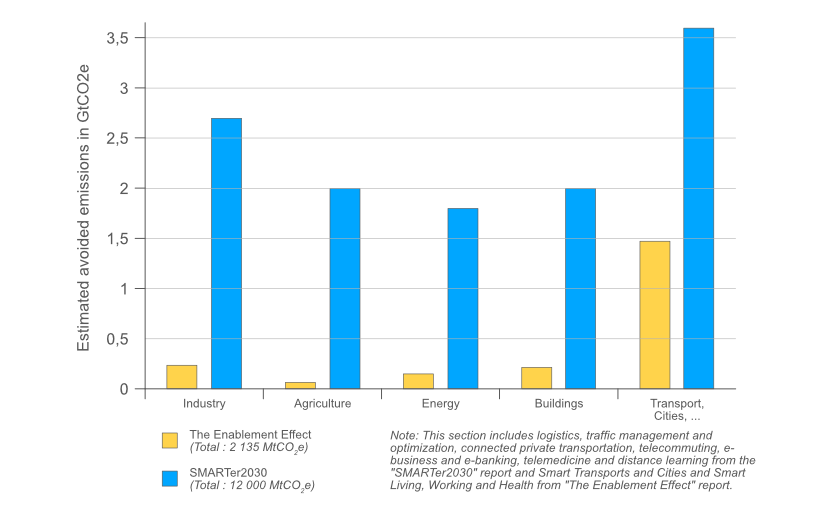 Explanation of Emissions Allocation for the 1:10 GSMA Ratio

How do we verify the GSMA and GeSI figures to determine how much confidence we can place in them? Global estimates are usually based on a sample of countries (9 for GeSI, 14 for GSMA) and in the same sectors in order to obtain a global value. The method proposed here is to compare the avoided emissions claims with the recorded emissions (IPCC, EU, UN, etc.) over the same period. To study the potential effects of digitization, it seems appropriate to go back to the mass introduction of smartphones to observe variations up to the last year where data is available. Let us then propose that the mirror check is from 2005 to 2017/18, in the same sectors and countries as the reports studied. Intermediate steps can be added to check trends at other levels, such as the European level.

This systematic audit was carried out from January to March 2021 and led to the publication of a technical report by the author of these lines. It is impossible to summarize all the results and conclusions, but the report is available for free here: http://gauthierroussilhe.com/pdf/NTE-Mars2021.pdf. However, we can show the sequence of the verification of GSMA's figures in the transport sector.

In 2018 the transportation sector emitted 8.1 Gt eq-CO2. GSMA makes the assumption that digitization would have avoided 0.64 Gt eq-CO2 in this sector, this would represent 8% of the sector's global emissions in 2018. GeSI estimates that digitization will avoid 2.6 Gt eq-CO2 in 2030, or 32% of transport emissions in 2018. Between 2005 and 2017, transport-related emissions increased by 21%. This growth leads to different hypotheses: if there is avoidance, then there are other factors that push the increase in emissions even higher; there is no avoidance and the effects are therefore not visible; or digitization produces on the contrary rebound effects that increase emissions; or all these factors mixed together.

In 2018 the transport sector emitted 946 Mt eq-CO2 in the European Union, these emissions were 979 Mt eq-CO2 in 2005. GSMA makes the assumption that digitalization would have avoided 127.7 Mt eq-CO2 in this sector in Europe in 2018 alone. Between 2005 and 2018, European transport emissions decreased by an average of 2.75 Mt CO2e per year (33 Mt CO2e in 13 years) while vehicles on the road increased slightly by 1.4% between 2000 and 2017. The estimates of avoided emissions are much higher than the evolution of emissions in the European Union and suggest either a large overestimation of GSMA's share or an uncontrolled growth of the sector in recent years that would have been partly hidden by the avoidances linked to digitalization. The first hypothesis seems more likely.

In the 14 countries of the GSMA and GeSI sample the emissions from the transport sector tend to increase largely, except in the UK and Spain. The I-DESI digitization rate is shown in order to identify a possible correlation between digitization and emission decrease. The decrease in UK emissions is in fact related to the series studied. The peak of UK emissions was in 2007 and so comparisons from 2005 to 2017 show a 16% decline. However, if the series studied starts in 1990 then emissions have only fallen by 3% in 27 years. Emissions remain almost unchanged between 2010 (124.5 Mt CO2e) and 2018 (124.4 Mt CO2e). In South Korea, known as a laboratory for new technologies, emissions have increased by 17% in 12 years. Over a broader period, from 1990 to 2017, emissions from the sector increased by 108%. This would be due to the number of vehicles on the road (x6.6 between 1990 and 2017), the expansion of freight transport (x6 over the same period) and the expansion of the road network. A priori, there seems to be no correlation between digitization and the decrease of greenhouse gas emissions in the countries studied. 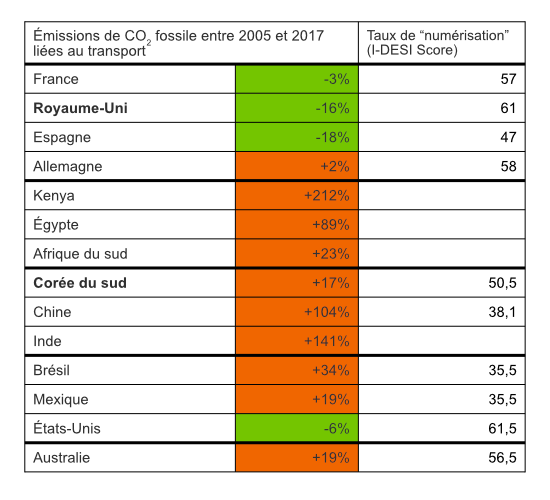 All data and sources mentioned in the macro, meso and micro checks are available on the report listed in bibliography.

Estimating avoidance effects implies calculating addition effects, i.e. sectors or activities where digitization increases GHG emissions (fossil fuel industry, etc.). If we return to the methodology used by GeSI and GSMA, we can do this calculation of addition effects. For example, McKinsey reports that a major oil and gas producer would have increased its oil barrel production volume by 2% on its offshore oil facilities thanks to real-time digital analysis of its production devices. Knowing that 26,400,000 barrels of oil equivalent were extracted from offshore wells each day in 2016, that's 9.64 billion barrels in one year (IEA). A barrel of crude oil would have an average carbon footprint of 40.7 kgCO2e (low estimate for offshore) (Jing et al.). If digital technology can effectively increase global offshore oil production by 2%, then this adds 192,800,000 barrels per year. In this case, the additional offshore oil production enabled by digital technology would then add emissions equivalent to 7.84 Mt CO2.

Beyond the "classical" rebound effects linked to behavioral changes and efficiency gains, we must integrate the fact that digitalization can accelerate material and product flows: extracting more barrels of oil, driving more cars (autonomous or not), producing more materials, increasing the scope and volume of supply chains, etc. This integration is currently little highlighted, but it requires real in-depth research to understand the effects of digitization in a more holistic way. We do not have the knowledge today to make a clear balance between avoided and added emissions.

The analysis suggests that, today, the digital sector does not offer any guarantee on the environmental issue. Similarly, there is no solid methodology today to rigorously estimate positive impacts. Many years of research and data are still needed before we have a clearer picture. However, avoided emissions and their counterpart, added emissions, should be estimated together (positive and negative direct effects) in order to have a much more concrete vision of the effects of digitization in the face of transition issues.