Digital technology and environment in a few figures¶

A digital equipment, by definition, is an equipment that manipulates digitized data, i.e. binary.

Digital equipment, according to greenit.fr1, are classified in 3 categories ranging from the general public to businesses.

Scattered and difficult to estimate data¶

The number of devices currently in use is difficult to estimate. Sales figures are available through trade databases, but items are grouped by typology (also called nomenclatures) and only describe trade. To estimate the number of devices actually in use, their lifetime comes into play1. A simpler source comes from the declarations of households in polls or surveys34. Finally, these figures can be corroborated by the number of subscriptions (internet box, telephone packages, etc.) and the metadata transmitted to companies by the terminals (during all internet connections). The figures presented here are therefore an estimate from Greenit's "Global Digital Footprint" report1, according to an inventory methodology based on sales and lifetime figures, and data collection from public and private companies.

The environmental footprint of global digital¶

The environmental footprint of digital technology is thought to be major and concentrated in the manufacturing phase, in terms of consumption of fresh water and abiotic resources, although poorly quantified.

This represents about 5.5% of global electricity consumption.

In 20207, in France, there will be 631 million pieces of equipment used by 58 million people, that is to say about 11 pieces of equipment per user if we consider the total population and 15 if we only consider the 15-70 years old bracket. Excluding the physical network core (cables, optical fibers, etc.), their mass represents about 7 million tons.

In 2019, French digital technology consumption represents about 40 TWh of electricity, or 8.3% of the French total (473TWh).

In France, energy consumption during the use phase (everything that happens to the equipment between its initial delivery and its disposal) is less carbon intensive than in the world, changing the proportions of environmental impacts between the manufacturing and use phases.

Per person (58 million users), this represents each day: 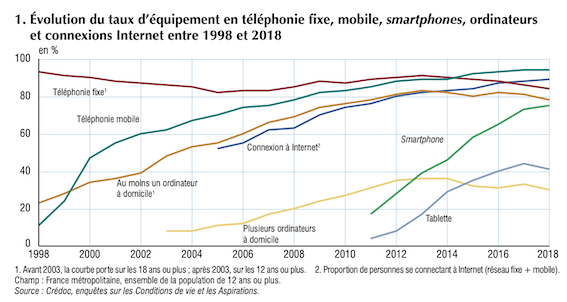 According to the Digital 2019 France report 5, on average, French people spend a day...

An opportunity for the environment?¶

According to the 2019 Digital Barometer3,